Infinite Enzymes’ Lcc (p-diphenoloxidase) is an oxidase enzyme (E.C. 1.10.3.2) from Trametes versicolor, a white rot fungus. It is produced in the recombinant corn seed production system (Hood et al., 2003) and sold as ground corn flour. It should be used with a mediator such as methyl syringate.

Laccase is an enzyme present in many microbes, plants and fungi, but is particularly prevalent in wood rot fungi. It is a monomer of 65-70 kDa from Trametes versicolor (Rheinhammar, 1984). Trametes versicolor –also known as Coriolus versicolor and Polyporus versicolor –is a common polypore mushroom found throughout the world. Meaning ‘of several colors’, versicolor describes this fungus that displays multiple color schemes. Because its shape and multiple colors are similar to those of a wild turkey, T. versicolor is commonly called turkey tail.

Lcc contains four copper ions per protein monomer and works as a tetramer. Laccases act on phenols and similar molecules, performing one-electron oxidations, which remain poorly defined. It is proposed that laccases in plants play a role in the formation of lignin by promoting the oxidative coupling of monolignols, a family of naturally occurring phenols. Fungal laccases play a role in the degradation of lignin, and can therefore be classed as lignin-modifying enzymes. Laccases require oxygen as a second substrate for their enzymatic reaction.

Suggested shelf life or term of expiration: at least 6 months

Laccases have been examined as the cathode in enzymatic biofuel cells, as industrial catalysts, for textile dyeing/textile finishing, wine cork making, teeth whitening, and many other industrial, environmental, diagnostic, and synthetic uses, as well as in bioremediation and for lignin degradation; pollutant degradation; and chemical reactions on phenolic substrates for manufacturing.

EFFECT OF TEMPERATURE AND pH ON ACTIVITY

Optimal temperature for this enzyme is approximately 45° C, although it functions from 20-45°C. pH optimum is 4.5-5.

Infinite Enzymes’ extracted laccase is ~65kDa. Blue dot shows laccase band. Very little can be extracted from flour but flour can be used with a mediator.

Assays are performed at 25oC for 5 m. Read absorbance at 420 nm in a BioTek Synergy 2 microplate reader or equivalent.

The enzyme is produced from recombinant maize that is grown under compliance with USDA regulatory guidelines. Unlike other commercially available oxidases, Lcc from maize grain is produced without typical impurities (other enzymatic activities) found in fungal-produced enzymes. 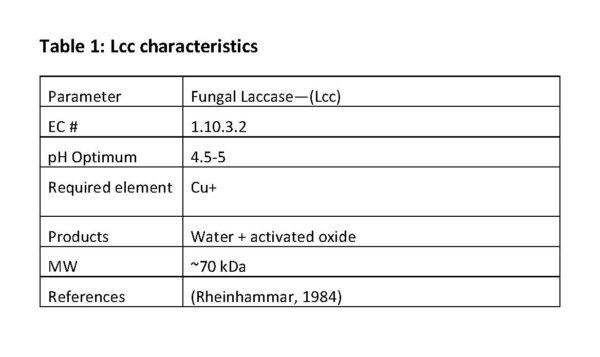